This blog post describes how I have set up a door-open detector at home. It uses a small ATtiny85 board that broadcasts a 433 MHz signal every time the door is opened. The signal is fetched by a Raspberry Pi that in turn publishes an MQTT message that results in the event being stored in a database and also being re-published to a cloud service. The circuit is only active when the door is open (and in that state only consumes 10mA), so the whole setup can be driven by a battery pack that is bound to last for a very long time.

I have a reed switch that I originally planned to use for turning on the hall lights when opening the front door. I have not yet found the perfect light source for this project, so while my quest for the ultimate welcome-home-lamp continues I decided to use the reed switch for an experiment with registrations of door-open events at home. My first idea was to use an ESP8266 board wired to the reed sensor. But as the purpose is only to trigger a simple event and as the ESP8266 consumes at least 70mA when active, I opted for a simpler processor and board – an ATtiny85 processor on an USB board. This is a very small and inexpensive board (about $5), but it does not have WiFi capabilities. So how to communicate the events? No worries! With a 433 MHz transmitter ($2.5), the ATtiny85 board can send a radio signal to my outlet-powered Raspberry Pi that can transform the event to an IP-based message. The circuit in this setup uses about 10mA when active, but when the door is closed, the circuit draws no energy at all. As I hate re-charging batteries, this is an option that fits me.

The board is a Digispark USB clone and it can be programmed via the Arduino IDE (see below). The transmitter and receiver are the cheapest possible, but I have found these to be very reliable if wires are added as antennas.

Working with the Digispark USB board

ATtiny85 is an inexpensive 8-bit AVR-processor from Atmel. It has 8kB flash memory, 512B EEPROM and 512 B SRAM and can be powered with voltages between 2.7 and 5.5 V which gives a maximum operating frequency of 20 MHz. For easy programming via the Arduino IDE, you can use the chip mounted on a development board like the Digispark USB. Here are some useful links for getting started with the Digispark USB board:

The wiring is very simple. A battery pack provides power to the Digispark board and the RF transmitter, but the current goes through a reed switch that is “normally closed”, i.e. the circuit is only closed when the door magnet is far from the switch. 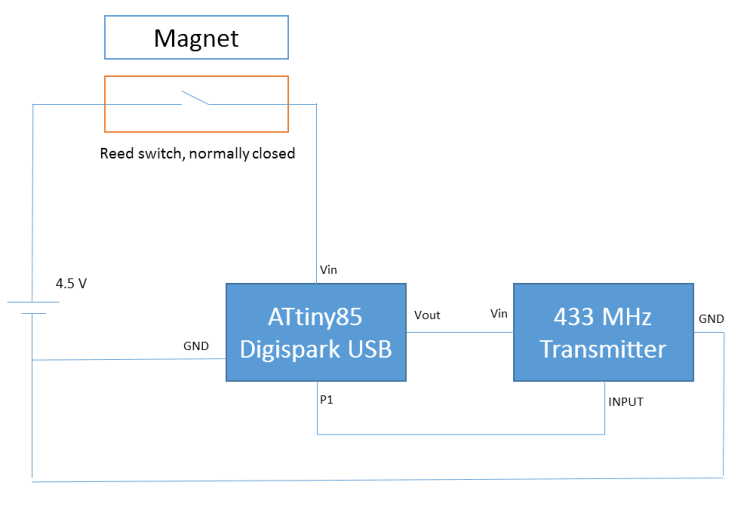 On my prototype board, the setup looks like this:

The RF receiver is connected to my Raspberry Pi 3. I use the same setup and the same Python script that I developed for this project:

The Arduino sketch for the Digispark USB board uses the RCSwitch library for sending a coded 32-bit 433MHz signal when the program starts. As there is no handshake with the receiver, I send the message three times to increase the likelihood that the receiver gets the message. For avoiding that a message is registered several times by the receiver, the message contains a rolling sequence number. This way, the receiver can detect duplicates. As the Digispark board is shutdown when the door is closed, I store the previously used sequence number in EEPROM so that it can be read the next time the board is booted (the next time the door is opened). I use a magic number (42) as first byte in the EEPROM memory to note that a sequence number is available.

(Additional note, August 2017: as the pi-switch library has been deprecated, I now use an ESP8266 with RCSwitch as signal receiver for transforming events to MQTT messages. See Addendum below for more details).

On the Raspberry Pi side, there is a 433MHz receiver and Python script that uses the pi-switch library for listening to signals. It is the same script and protocol that I used in this post for radio communication between an Arduino and a Raspberry Pi:

except that, in this case, when receiving a door open signal, an MQTT message is constructed and published.

The MQTT message is fetched by the subscribers that I have in my home MQTT setup. See this post series for details:

One subscriber stores the data locally and another one forwards the message to an external cloud service.

So with this setup in place and the reed switch and magnet mounted on the front door, I get a registration of every door open event in a MongoDB database (visualized on the local LAN with my chart app, https://larsbergqvist.wordpress.com/2016/07/10/a-web-app-for-iot-data-visualization/) and externally on Adafruit IO.

With the message stored in Adafruit IO, you can use IFTTT to generate a trigger like an email alert when the door is opened. Nice to have when away and wanting to have an eye on the door. But very irritating when the kids run in-and-out when you’re at home :-). 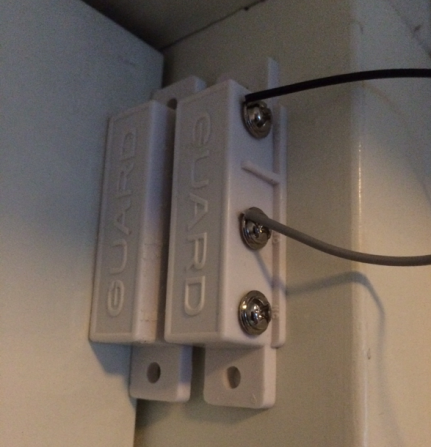 The code for this project can be cloned from GitHub:

I have modified the original setup of this project slightly. I finally found a nice LED-stripe that I have mounted at the top of the door. The detector setup now uses a relay to switch on this light source when the door is opened (it still sends a 433MHz signals so that the opening event is registered). I have also switched from a Digispark board to an Ardunio Nano to get more I/O pins and easier programming. See this Arduino IDE-project:

As the pi-switch library has been deprecated, I have replaced my Raspberry Pi with an ESP8266-board as a 433MHz event detector. The ESP8266 has a 433MHz receiver module and listens for incoming signals. It then transforms the events to IP-based MQTT messages. See this repository:

The Sensor433 library and Geeetech transmitters and receivers